Charlotte County has at least 40 different species of mosquitoes! Each species is unique in the way they look, their breeding preference, host preference, and even period of activity. Below are some of our most common mosquitoes along with a brief description of each. Use this as a guide to help determine what species are bothering you and where they may be coming from! This mosquito is one of our most common late summer mosquitoes. They are a dull brown color and are responsible for vectoring West Nile Virus and St. Louis Encephalitis. Females lay their eggs on the surface of water in floating clusters call egg rafts. They prefer to breed in freshwater areas including ditches and manmade containers. Their larvae have long skinny siphons and usually rest at the surface of the water at a 45-degree angle.

Anopheles crucians mosquitoes have palps as long as their proboscis and spotted wings. They are primarily responsible for vectoring Malaria. Females lay their eggs singly on the surface of water and prefer to breed in ditches and bodies of water containing algae. Their larvae lack a siphon (breathing) tube, so they are seen resting perpendicular to the surface of the water. Psorophora columbiae tend to be larger than average and can be very aggressive even during daylight hours. They are mainly found in rural areas and/or areas where water sits on open grassy lots and fields. They can also be found breeding in ditches along rural roadsides. Females lay their eggs in the soil of such low-lying areas and once these areas become flooded by the rains, they will often hatch in large numbers becoming a nuisance to humans and livestock alike. They are not known to be a disease vector of importance. Also known as "Salt Marsh Mosquitoes", Aedes taeniorhynchus species can be vicious biters day or night. A medium-sized mosquito, they tend to be dark in color with distinct white striping on their legs and abdomen. Although they have the capability of flying far, you will usually only see them in areas adjacent to salt flats and mangroves. As their nickname implies, salt marsh mosquitoes breed in saline and brackish waters. Females lay their eggs in the exposed soil of the salt flats when tides are low. These eggs can lay dormant for several years! When they become flooded by high tide or a heavy rain event, they hatch and quickly cycle from larvae to adult in roughly a week if temperatures and humidity are high. 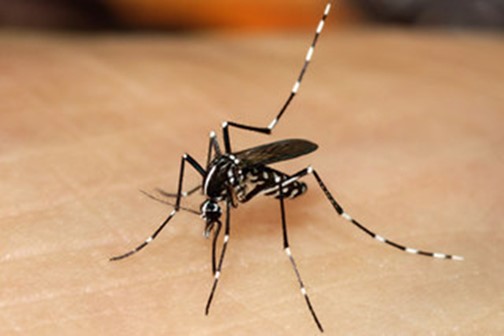 Aedes albopictus is commonly known as the "Asian Tiger Mosquito". They are thought to have been imported to the U.S. from Asia in a shipment of tires in 1986 and have quickly established themselves here. Daytime biters, they tend to be small and fly lower to the ground. They are very dark in color with a single bright white stripe down the center of the thorax and white stripes on the legs and abdomen. These mosquitoes can be found breeding in tree holes, bromeliads, and containers, and do not fly far from where they hatch. Females lay their eggs on the side of the container at the waters edge. This species is responsible for vectoring Yellow Fever, Dengue, Chikungunya, and Zika Virus.

Also known as the "Yellow Fever Mosquito", Aedes aegypti is very similar to Aedes albopictus in that they share the same breeding grounds, behaviors, and vector the same diseases. A rather shy mosquito, they are referred to as ankle-biters, as they will fly low to the ground and nip and fly away repeatedly. They are small, dark, and have a distinct white lyre-shaped marking on the top of the thorax and white stripes on their legs. They prefer to breed in tree holes and manmade containers, as well as bromeliads. They are daytime biters, do not fly far from where they hatch, and love to co-exist with humans making them an efficient vector of Yellow Fever, Dengue, Chikungunya, and Zika Virus.

Both the dyari and titillans species have very similar features. They are medium-sized and become very aggressive right at sunset for an hour or two. They appear "dirty" or "salt and peppery", have a blunt abdomen, and narrow white stripes on their legs. These mosquitoes breed in ponds, canals, and ditches with water lettuce or water hyacinth. Their larvae depend on those types of aquatic plants to breath and do so by piercing the roots with a saw toothed siphon. As a result, you will never see these larvae resting at the surface of the water to obtain oxygen. This is one reason why mosquito and aquatic weed control go hand-in-hand. The control of certain aquatic vegetation helps to reduce numbers of these particular species that depend on them. Also known by locals as the "Feather Legged Galinipper", these mosquitoes are our largest biters! They are big and robust with fuzzy legs and an aggressive and painful bite. You will usually see this species in rural areas where pastures have become flooded from established rains. Their larvae are large and predatory, feeding on other larvae and even each other! They are not known to vector any diseases. This is another larger than average mosquito and usually becomes established during the summer months when low-lying woodland areas begin holding water. They have a beautiful display of iridescent purple scales along their legs and abdomen, with hind legs adorned with a white "sock". They prefer to breed in flooded wooded lots and are associated as a woodland species and are not known to transmit any diseases. Another woodland species, Aedes atlanticus is a medium-sized mosquito with a distinct pale-white stripe down the center of the thorax. Their legs are not striped. They can be aggressive when seeking a blood meal. Females tend to lay their eggs in flooded woodland areas. They are not known to vector any diseases. Similar in size, look, and behavior of Aedes atlanticus, the Aedes infirmatus mosquito is also associated with flooded woodland pools. The legs have no stripes and the thorax has a broad bright white swath of scales as well as bright white scaling underneath the abdomen. This species is not known to vector any diseases.

Aedes sollicitans is a salt marsh mosquito and is seen in areas just adjacent to the salt flats. South Gulf Cove is notorious for seeing this species of mosquito. They are strong flyers and aggressive biters, day or night, with a seemingly distinct sting to their bite. They have light golden colored scaling boarded with black on the top of their head and thorax with broad white patches of scales on the sides of the thorax. Their legs have white striping. They prefer to breed in saline conditions and the salt flats are their primary habitat. Although they can be a huge nuisance mosquito, they are not known to vector any diseases.