Recent observation has concluded that Charlotte County Florida has new exotic and invasive residents. These residents include the common green iguana (Iguana iguana), black spiny-tailed iguana (C. similis), and Mexican spiny-tailed iguana (Ctenosaura pectinata). Their inhabitation of south Florida is believed to be a result of accidental importation on ships, as well as pet iguanas escaping or being released. Subsequently, these reptiles have established breeding groups and proliferated very successfully in the subtropical climate of south west Florida.

Why are iguanas a problem?

Iguanas are not native to Florida and as with many exotic plants and animals introduced into new areas; they have the potential to impact native plants and animals. Iguanas reproduce rapidly in the subtropical climate of south Florida and have no natural predators to control their population. Iguanas will out-compete native species for food resources as well as shelter and have been documented displacing native gopher tortoises in burrows. Iguanas can also potentially carry parasites and bacteria that can be spread to native species that have no natural resistance to foreign pathogens. 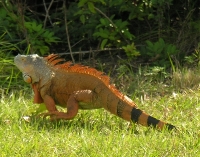 Do not release unwanted iguanas into the wild. This is not only illegal (68A-4.005 Florida Administrative Code) but can have long lasting impacts beyond the life of the released individual reptile. In the event you can no longer care for your iguana check with people you know to see if they are interested, advertise in your local paper or contact the Florida Fish and Wildlife Conservation Commission at 1.888.404.3922 and ask about pet amnesty programs near you. If these options are not available to you contact your local humane society or local pet store.

Feral hogs (wild hogs) are not native to Florida and were first introduced to Florida by Spanish explorers as a source of food. As with other introduced exotic species, feral hogs have negative impacts on numerous native species (especially ground nesting birds and snakes) and are responsible for millions of dollars in damages to residential property each year. Feral hogs are hardy and prolific; having 1-2 litters of 5-6 piglets each year and have few predators. Exotic/invasive species often serve as carriers for pathogens and parasites which native species have no defense. Brucellosis is a common bacterial infection among feral hogs that can be easily spread from animals to humans.

Feral hogs are dangerous and will readily attack when they feel threatened. Do not attempt to approach feral hogs. Do not attempt to approach feral hogs in traps as there is a possibility they will become agitated and attempt escape. This may cause damage to the trap or injury to the animal. If you see a trapped animal on county property contact Charlotte County Natural Resources at 941.613.3220 and report the location of the trap and the property you observed the trap on.